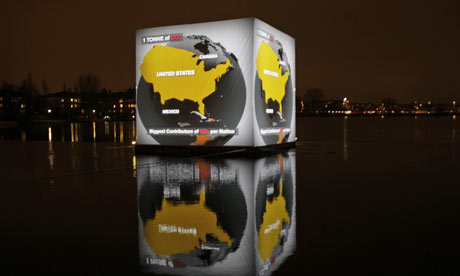 Many will simply dismiss the current storm over the “secret document” as all part of the theatre of international negotiations. Of course there is a document in circulation. Official documents still run over a hundred pages with innumerable square brackets around undecided text. Yet ministers and world leaders arrive next week and they need something to sign. Everyone concedes that the UN process is unwieldy and sadly, as far as the world outside is concerned, time has run out for this negotiation.
So the Danes did what they had to do – drafted something they hoped ticked most of the boxes and then set about consulting on it. The question is what happens next? Hopefully after the outrage has died down, the process of knitting together a document that both the G77 and China and the US, Europe and the rest of the industrialised nations are happy with will begin.
The main sticking point in the new text is the laissez-faire approach to developed country targets. The text implies that targets will be derived from the pledges made by countries rather than by any top down science led formula. In that sense it reflects the political reality of the situation. But there is also no mention of any compliance mechanism which is a serious omission guaranteed to undermine trust .
These are the issues developing countries now need to focus on, as well as ensuring that all developed countries — most notably Europe — commit to at least the upper end of their target ranges.
Something like the Danish text has to emerge at the end of this process. It will be in no one’s interest, least of all the poorest nations, to abandon hope of producing a clear, intelligible text indicating the way forward.

Here’s the link to download the notorious DANISH TEXT: download
The following clip which covers different kinds of opinions on this issue is from Newsy.com
Read this next